Chronic fatigue is defined as any abnormal levels of fatigue lasting longer than 6 months. Myalgic encephalomyelitis/Chronic Fatigue Syndrome (ME/CFS) is an illness that was first observed in the 1950s in a London hospital. A similar outbreak occurred in the 1980s.  The Centers for Disease Control (CDC) estimates 2.5 million Americans have ME-CFS. Most report that the illness started with an episode of a cold virus, mono, or the flu, and symptoms may include: fatigue, brain fog, deconditioning, excessive sleep, and depression.   Unfortunately, these symptoms are all too common among many of our chronically ill patients who are struggling with Mold and/or Lyme Illness.

The medical establishment has traditionally dismissed ME/CFS as being psychosomatic in nature. Recently, however, the 'The Cell Danger Response' (CDR), as proposed by Dr. Robert Navieaux MD, Ph.D., gives us a theoretical framework for not only CFS but all chronic illnesses. 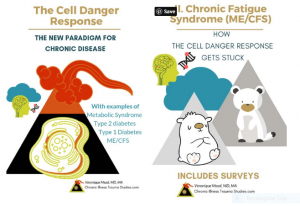 His theory states that when cells perceive an outside threat, they go into a 'hibernation mode' until the threat is gone. This explains why we have fatigue when we get a cold. All of our energy must be preserved when our immune system is fighting the virus. That means all non-essential functions-like higher brain function, digestion, detoxification, etc. are put on hold until our bodies beat the virus. So this process works great for acute illness but becomes problematic when the body incorrectly perceives a threat as a perpetual threat.  Similar to how a car could get stuck in first gear, the immune system gets stuck in a hyperactive mode. Because of this certain cells and organs may get stuck in a low state of metabolism, whereby organs such as the thyroid and adrenals may not work properly.  To learn more about the Cell Danger Response, see this video.

Imagine having cold symptoms that last for months or even years. This is what Chronic Fatigue feels like.

Viruses are notorious for initiating chronic fatigue. A similar post-viral illness was observed in the last SARS epidemic in 2003 and was characterized by "persistent fatigue, diffuse myalgia, weakness, depression, and non-restorative sleep" and may have represented as many as 40% of those who survived.

We found the key to treatment is to identify and treat the triggers of the Cell Danger Response. Given the fact that there could be many triggers, this is not an easy task.  Treating any underlying mast cell disorders is often a key priority. At the same time, supporting various detoxification pathways, supporting methylation, and of course mental and emotional support are often needed. Often various organ systems such as adrenal and thyroid need to be rebooted and supported. Hormonal replacement is often needed.